Frequent public transportation riders across the United States are familiar with the layouts and accommodations of their cities’ buses, trains, and shuttles. Outfitted in each mode of transport is a large area specifically reserved for people with differing abilities. These offerings have been in circulation for nearly four decades thanks to the bold work of 19 men and women who brought attention to this issue in the summer of 1978. Known as the Gang of 19, this group paved the road for creating the Americans Disabled for Accessible Public Transit and later landmark legislation, such as the Americans Disability Act (ADA).

In 1977, attorney John Holland issued a lawsuit that put Denver’s Regional Transportation District (RTD) in the spotlight for its inequities to residents who needed wheelchair accessibility. At that time, the RTD only had ten wheelchair accessible buses for the city. Holland’s lawsuit stated that Denver needed approximately 213 buses, or one-third of the total fleet, to meet the needs of its residents. This injustice also caught the attention of Wade Blank who was a prominent member of the Atlantis Community, a southwest Denver-based independent living community whose goal was to create a community inclusive to those of all abilities. The Atlantis apartments gave people of differing abilities their first home and, with that, a level of autonomy they had not experienced. For many, they could choose when to go to bed, when to eat, what to eat, who came in their doors—and who did not. Wade organized with others to lead one of the most heated protests the following summer.

On July 5th and 6th, 1978, disability rights activism took center stage in the Mile High City. Later known as the Gang of 19, a group of disability rights activists staged a protest at one of the busiest intersections in Denver, Broadway and Colfax Avenue. These individuals got out of their wheelchairs and laid down in the street to stop a Denver bus to protest the inaccessibility of the city’s public transit system and the need for transportation equity. As the first bus stopped, another bus on that same route pulled up behind the first bus. More protestors surrounded both buses. These buses stayed in place for the next 24 hours and throughout those hours the Gang of 19 chanted “We will ride!” ushering in a movement that catalyzed transportation equity into the next century. 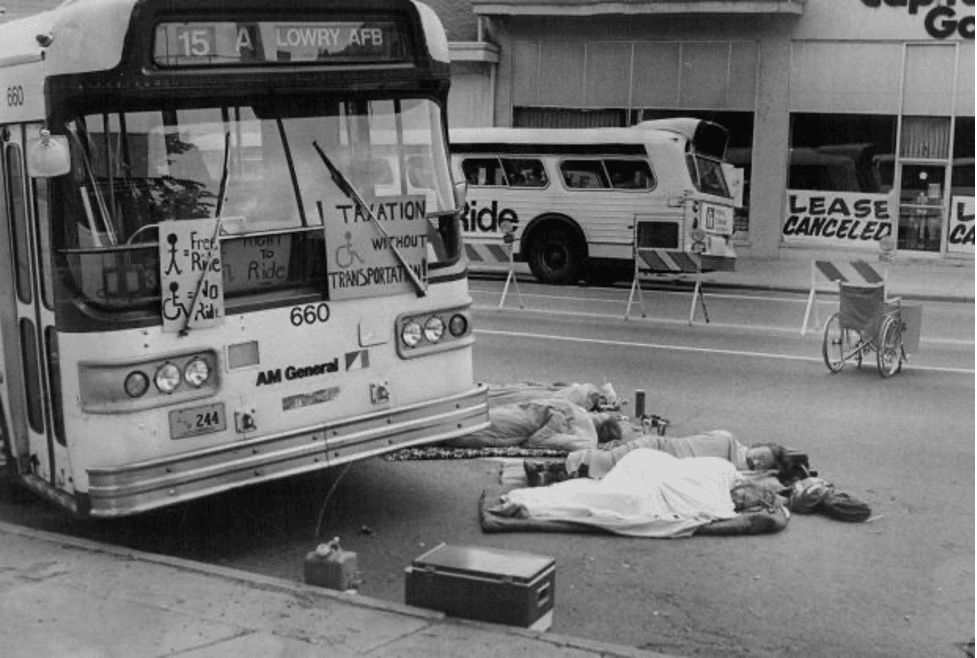 (Glen Martin, The Denver Post) -- Four demonstrators slept in the street the morning of July 6, 1978, after spending the night blocking two Regional Transportation District buses near the corner of East Colfax Avenue and Lincoln Street. They were among about 30 persons who maintained an overnight vigil to dramatize the need for greater accessibility to public transportation for the disabled. The buses stopped and barricaded by about 30 persons early Wednesday, were freed Thursday morning. The barricade has served its purpose, said Wade Blank.

After the two-day protest and months of litigation, Holland and Atlantis appealed and settled with the city of Denver’s transportation leaders. The primary legal victory resulted in Denver RTD retrofitting all 213 buses with wheelchair lifts. The victory spawned a legal avenue for provisions to the rarely enforced disability equality rights acts. The outcome of the protest by the Gang of 19 assisted the creation of the American Disability Rights Act, which was championed by other disability rights activists like Judith Huemann and Patricia Wright.

(Kenn Bisio, The Denver Post) -- Two disabled demonstrators sat near RTD buses on July 5, 1978, near Colfax Avenue and Broadway in Denver. They were among more than 30 persons who barricaded two buses to demand accessibility to transportation

Today, these accommodations have created space for people with permanent, temporary, and unseen needs for accessible transportation.  According to the CDC, one in seven U.S. adults live with a mobility disability, and that experience can become more common across our population with age. Disabilities don’t always occur at birth and can progress over time. Not all mobile disabilities are visible or require constant use of commonly associated tools such as walkers or wheelchairs. Reliable transportation can improve individual health and decrease healthcare costs – every American, regardless of their abilities, should have access to that public service. The diversity of the experiences of disabilities only strengthens the need for accessibility and universal design to be prioritized in everyday living.

For more information on the Gang of 19, we recommend checking out the PBS documentary Colorado Experience: The Gang of 19 - ADA Movement.